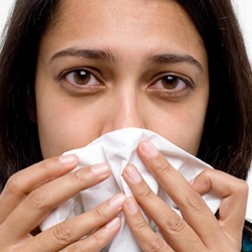 Looking for seasonal allergy relief? Kathryn Roethel reported in the San Francisco Chronicle that researchers found acupuncture may be an effective treatment for the sneezing, watery eyes, and general misery that strike 40 millions Americans during this time of year.

In a study published in the Annals of Internal Medicine, researchers divided 422 patients around the country into three groups. One group received 12 acupuncture treatments in eight weeks. Its participants were told they could take antihistamine to treat allergy symptoms as needed. A second group would also take medications but received an acupuncture placebo – needles inserted randomly rather than in specific acupuncture points. The third group treated allergies with antihistamine only.

After eight weeks, a survey of patients showed that the group that had genuine acupuncture reported the most improved symptoms and the least use of medication. The sham acupuncture patients reported some relief – though not as much as the group with real acupuncture – leading scientists to call for more research into the placebo effect, the body’s natural ability to heal.

The study pointed out that about 18 percent of allergy sufferers in the US already use acupuncture to ease symptoms or complement other treatments! At Massage Therapy Center Palo Alto, Dr. Susan Cheng, LAc, OMD, a practitioner with a unique educational and training background and over 20 years of experience, provides high quality Chinese medicine and acupuncture treatments.