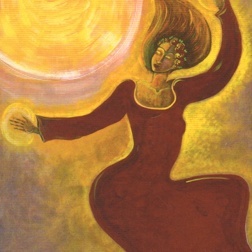 Says Bonnie Gintis, Osteopath, Continuum Movement teacher, and author of Engaging the Movement of Life: “If our bodies were able to move freely, the way they are designed to, without the constraints of habit, they would self-correct more often. Many people have lost the instinctive ability to sense this. We yawn and we occasionally stretch, but most of us don’t engage in much spontaneous movement. If you watch a baby, a child, or even an animal move, you will see them undulate, twitch, make faces, move their arms and legs like tentacles, separate their toes and wave them, and engage in a wide variety of seemingly random gestures. Infants have no assumptions about their bodies, no agendas about their posture, no self-consciousness and restraints about how they think they should move. They move in response to the creative flux of growth, and they quickly adapt to their environment and their circumstances. This enables them to respond quickly to their own healing forces.”

It is this approach—which encompasses fluid movement, open attention, and awareness of sensation and breath—that the bodywork at Massage Therapy Center Palo Alto is encouraging in your body during your session. Removing constrictions is the first step, but more importantly it is the body’s innate response to the resulting freedom that enables the healing forces to bring forth a more coherent way of being, both physical and emotional.